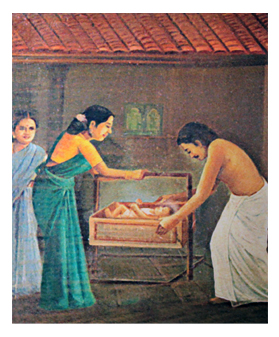 Arul Thiru Bangaru Adigalar was born on March 3rd, 1941 at Melmaruvathur village to the noble souls of Sri Gopala Naicker and Tmt. MeenakshiAmmal. He was the second child, and has a younger brother and a sister. His Holiness, The Arulthiru Amma, is believed to be a POORNA AVATAR (holding all 16 qualities of an Avatar) and the incarnation of the Supreme power – ADHIPARASAKTHI.

The term AVATAR denotes one who has descended to Earth in human form from the spiritual realm of God to re-establish Righteousness in the world and to preserve the human race from extinction. Mother Adhiparasakthi, with Her boundless grace, making Herself a standing example, has therefore come down to this physical planet to re-establish the virtues, and to instill spirituality among the masses, taking the human form in Sri. Adigalar.

From a very early age, there were signs to show that His Holiness was not an ordinary child. In the Indian tradition, the snake is considered as a representative of the Divine. Sri.GopalaNaicker’s family saw enough evidence of the presence of the Divine in His Holiness before His Holiness attained the age of puberty.  But soon, many other evidences explicitly revealed the divine incarnation of Mother Adhiparasakthi in Sri. Adigalar.

From a very early age, there were signs to show that His Holiness was not an ordinary child. In the Indian tradition, the snake is considered as a representative of the Divine. Sri.GopalaNaicker’s family saw enough evidence of the presence of the Divine in His Holiness before His Holiness attained the age of puberty.  But soon, many other evidences explicitly revealed the divine incarnation of Mother Adhiparasakthi in Sri. Adigalar.

Possessed By The Divine

When His Holiness wa 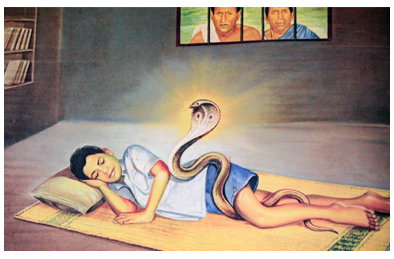 s a young boy, He was sleeping alone, while the family members were doing their daily chores. When His mother peeped through the window to see if all was fine, she was utterly shocked to see a king cobra coiled around The Child.  She screamed with terror and Sri Gopala Naicker, who was outside talking to someone, rushed in and was stunned at the horrifying sight. The snake and The Boy seemed to be playing! Sri.Naicker prayed even as others looked for sticks to kill the snake. “Oh Divine Mother, don’t harm The Child. He is Yours. Save Him,” Sri.Gopal Naicker prayed calmly. The snake seemed satisfied with the game and prayer, left the place leaving The Boy unharmed.

There is a Goddess Mariamman temple right across Sri.Gopal Naicker’shouse. Every year, the family would conduct special auspicious festivals for the Amman. In that particular year when – His Holiness was still a young, school-going boy, they were celebrating the annual festival at the Mariamman temple, when suddenly, The Divine possessed the young boy.“Son!”, He addressed his father, perplexing the elder man. Sri.Gopal Naicker was too naive to realise the power of the visitation. But, slowly realising that the Divine was addressing him, he most respectfully heard Her out as she said, “Through your son, I shall wipe out the sorrows of the people; I shall bless the people with Divine words using your son as my vehicle.”

Sri.Gopal Naicker, still stunned, asked, “But, what about His education?” “Don’t worry about His education. I shall take care of it,” She assured him. Suddenly, The Boy grabbed the heavy brass plate used for performing Deepa Aaradhana and twisted it with ease– really an impossible task for a boy of that tender age.

Sri.Gopal Naicker, humbled by this display of power, immediately said, “If you live on our lands, then we will be able to construct a temple and conduct festivals easily.” “So be it!!” She replied instantly.

Thirst Quenched By The Divine 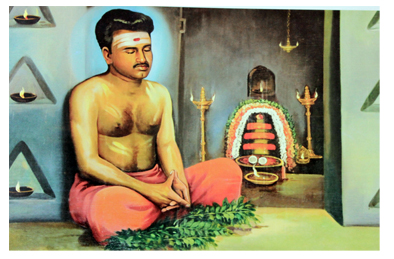 been very attached to His elder sister, who died of smallpox at a young age. Everyday, He would visit the site where she was buried. That day too, on returning from school, he stuffed his pockets with roasted peanuts that his mother had made for Him and headed to the spot, where His sister lay buried.

For a long time, He sat there munching the peanuts. As the evening shadows lengthened, He started feeling thirsty. Though there were wells nearby, He hesitated as He did not know to swim. Suddenly, an elderly woman who passed that way approached His Holiness and offered water to quench The Boy’s thirst. He did drink the water and was relieved and satisfied greatly.

He was, however, totally surprised to meet the woman in an untimely hour and when He raised His head in greatfulness, alas! There was no one there. He was very much humbled by this display of power.  As Gnana Sambandar, the child who attained Mukthi at a tender age, was fed with celestial milk by Goddess Parvathi, His Holiness was offered water by the Almighty Goddess.

Once, His parents took Him to a temple festival.  A toy seller asked Him what toy He wanted to buy.  His Holiness immediately pointed to one particular toy and it was the idol of Devi Bhuvaneshwari.  The idol became the first object of devotion and the inner urge of the Divine Child was clearly exposed.

His Holiness’ Career And The Intervening Emotions

Many years later, when He was training to become a teacher, He experienced many different kinds of emotions, thanks to the guidance of The Mother. But, His friends thought that He was joking when He tried talking to them about it. On several occasions, He had fallen down because of the trance – like state He would get into.  After completing the teacher’s training course, He got a job as a teacher in Arapeduvillage near Achirupakkam.

Shri.Adigalar, being a Saint who involved Himself in family life, adds credit to this most Noble and Spiritual Organisation. 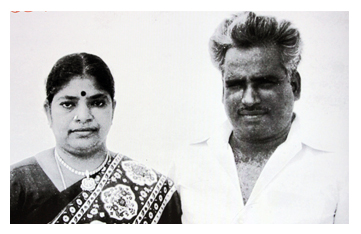 “It is best for you to participate in this spiritual movement as husband and wife” ~ Amma’s Oracle.

Shri.Adigalar married Selvi.Lakshmi (the ninth daughterof Sri.Venkatachala Naicker and Srimathi Vishalakshi of Uthiramerur) on 4thSeptember, 1968. They have two sons and two daughters who are also deeply involved in the Spiritual Movement. The greatness of this Avatar lies in practicing spirituality even as a family man. 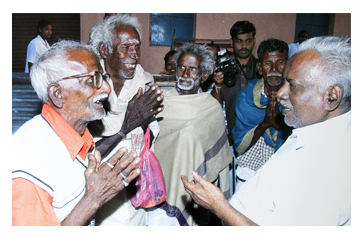 His Holiness’ Oracles and Miracles attract millions of devotees from all over the world who come to seek His blessings.  Clad in a simple white shirt and a red dhoti, sans all ornaments, like a Sanyasi, Sadhu or Godman, Amma is a personification of Simplicity. His Holiness’ profound qualities of love, compassion and sacrifices have led to His devotees calling Him- ‘AMMA’.

The greatest thing about Amma is His Humbleness. Even though devotees see Amma as Adhiparasakthi’s Avatar, Amma is always humble which can very well be realised through one of His sayings, “I AM JUST A SERVANT TO ALL”. That is Amma!

Amma is truly the loving mother of the Universe. Her love reaches out to every human being, not only in India, but the world over.

Clairvoyance Or Oracles Of His Holiness

His Holiness started His Oracle from 1970. Whatever Amma speaks is being recognized by the devotees as His Oracle as all His words turned true, to the core, sooner or later. By His Oracle, He solved the problems of many who came to Him for solution. Through the Oracle, Amma spread the faith in God and Spiritualism, gave spiritual philosophy, and cured many families from their diseases and curses.

His Holiness has revealed many Oracles.  His Oracles are about Spiritualism, Nature, Medicine, Worldly affairs, etc., and He reveals Oracles exclusively for individuals too.  Here, I am publishing few of His Oracles, which will always hold good forthe mankind.

“From birth to death, man evolves through seven stages. In all these seven stages, man requires spirituality”.

“If you give a pistol to a child, it will shoot itself. Similarly, if you do not keep your mind in control, it will destroy you. Only through meditation and spirituality, you can control your mind”

‘In the forest, a tiger will attack a goat; that is worldly life. But, in the spiritual world, a goat can control a tiger”

‘Scientific power will not and cannot give everlasting benefits to the mankind. Only spirituality will give you everlasting power. Spirituality has more power”

“You need to understand yourself; that is why, you require spirituality. Only spirituality can control the ever growing confusions in the world”

“Nature causes growth; science causes destruction; with your own hand, you destroy yourself! Going against nature would lead to disaster”

“While meditating, your mind gets distracted. Don’t lose heart. Set your mind free. First, it will move with the pace of a horse, then like that of a deer, and then it will gradually be stabilized.  “By meditating, you develop the art of tolerance, good nature and self-control. Meditation paves way to calmness”

People slowly started realising that His Holiness, Bangaru Adigalar is the living incarnation of Goddess Adhiparasakthi.

The Oracles of His Holiness and His preaching contain radical, but, practical spiritual paths. These are the words of the Divine Mother.  He imparts spiritual practices geared to individuals to suit their level of maturity in spirituality. His Holiness preaches the path of Dharma (righteousness), Bhakthi (faith), Meditation (for self-realization) and Selfless Service to the society, which He emphasizes as the shortest route to attain Divinity.

He is the upholder of Dharma in this Kali Yuga; the living God, who has shown by practice that Spirituality is the blend of Devotion and Duty. In His words, “Duty is service to the deprived and to the downtrodden.” His objective is to carry spirituality to the doorsteps of common man, so that human race, as a whole is elevated.