There are quite a few festivals that are celebrated at the Peedam in Melmaruvathur. Thai Poosam, Amma’s Birthday, ChitraPournami, AadiPooram and Navarathri festivals are celebrated in a very grand and festive manner. All draw huge crowds to the Peedam. The dining hall can accommodate more than 2000 devotees at a time. A full meal is served on festive occasions.

Sakthi Malai,a beaded garland with a blessed dollar coin, involves Sakthis (devotees of Amma) putting the Sakthi Malai around their neck in their Mandrams, fasting and doing penance for 3-5 days. They then travel to the Siddhar Peedam and complete the rituals by performing Abishegam (milk anointment) to the Swayambu.

Amma, in HerOracle has said, “Those who sincerely think of ME and pray to ME, by wearing Sakthi Malai, observe fasting, do Angapradhakshanam (perambulating the Sakthi Peedam by physically rolling on the ground) at the Siddhar Peedam and completely surrender themselves to ME, will find their wishes fulfilled and problems solved.”Hundreds and thousands of devotees, and their families have benefited wearing Sakthi Malai and carrying Irumudi.

“I am teaching each and everything to you, just like a mother would feed her child with love and care. It is up to you to realize this and do service to get my blessings. Don’t miss the opportunity.”

Adigalar’s day of incarnation was first celebrated on 3rd March, 1983. This day is celebrated as the Day of the Guru-Disciple relation, as opposed to other festival days which are normally celebrated as a God-Devotee relation.

Devotees, in their love and gratitude to their Guru, perform Paatha Pooja (worshipping and praying at the Divine Lotus Feet) on this day, followed by Amma giving Darshan (audience) to the public from morning till evening. This day is also celebrated with a procession arranged from Amma’s house to the Siddhar Peedam, where Amma sits on a golden chariot, to the delight of thousands of devotees.

One of Amma’s many Oracle states, “Do not forget your Mother and Guru”.  Since 1995, this incarnation day is celebrated for three days, with various service projects and cultural programs arranged both in the lead up to and during this period.

This festival usually falls during the April-May period as per the Gregorian calendar; however, as per the Tamil (ancient language of India) Calendar, the festival is celebrated on the full moon day in the month of Chithirai (the Tamil month of May). This festival is signified by the large scale KalasaVezhviPooja, which is held at the Siddhar Peedam. Thousands of Yagnasare performed by devotees for their welfare and for the welfare of the world at large. 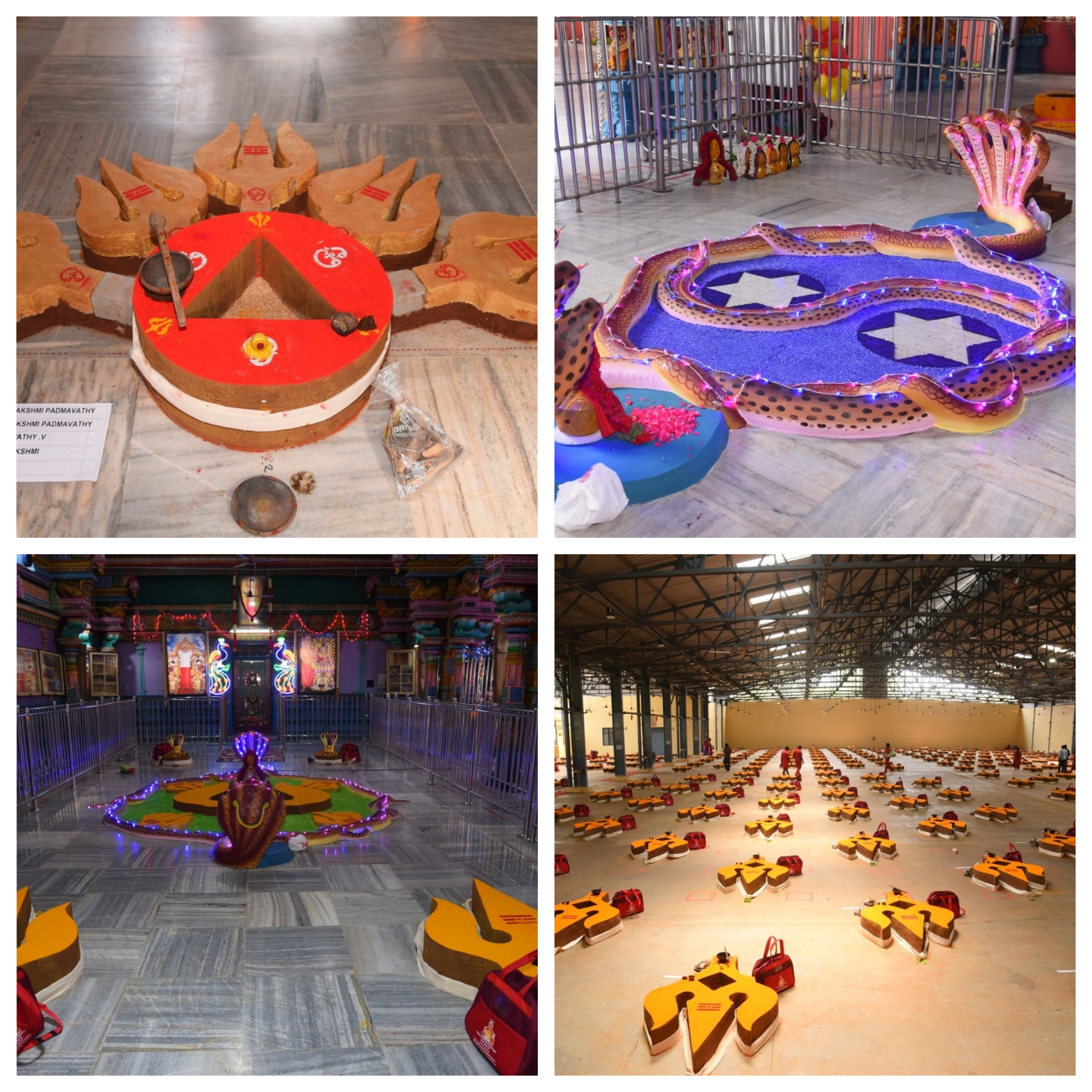 The three important aspects of the Aadipooram festival held over 2 days are serving Kanji (Gruel) to Amma, devotees themselves performing the Milk Abhishegam (anointment) to Swayambu, and Amma Herself(in the form of Arul Thiru. Adigalar) performing the noble Angapradhakshanam (perambulating the Sakthi Peedam by physically rolling on the ground).

Serving Kanji (Gruel) is a special offering to Amma. As stated in HerOracle, “Son, the Kanji you have brought here as an offering is not an ordinary one. To Me it is the GOD’s divine food (Amirtham). The kanji(gruel) is not made up of rice and ghee, but it carries with it, the invaluable love, affection and devotion of my devotees.” Thousands of people bring this gruel, take it around Siddhar Peedam, after which it is served to all.

Milk Abhishegam to Swayambu is yet another important event, where everyone is given the opportunity to enter the Sanctum Sanctorum and perform Abishegam with their own hands. Amma has advised that devotees with multiple problems will find solace and resolution through this process. Furthermore, those who are keen to enhance their spiritual growth and development will also benefit from this.

Angapradhakshanam by Amma is a highly significant aspect of this festival. Following a bath, Arul ThiruAdigalar reaches the Sanctum Sanctorum, stands in front of the Swayambu and becomes an incarnation of Adhiparasakthi in a fraction of second. In this transcendental state, Amma resembles a cobra, and leaps from the Sanctum Sanctorum to the Mandapam, around two metres away, and then goes around the Siddhar Peedam. Such feats are beyond the human comprehension and ability.  The purpose of this is to save people from their fate and destiny. As such, devotees are encouraged to perform Angapradhakshanam, while at Siddhar Peedam, to cleanse themselves of their negatives, and magnify their spiritual energies. 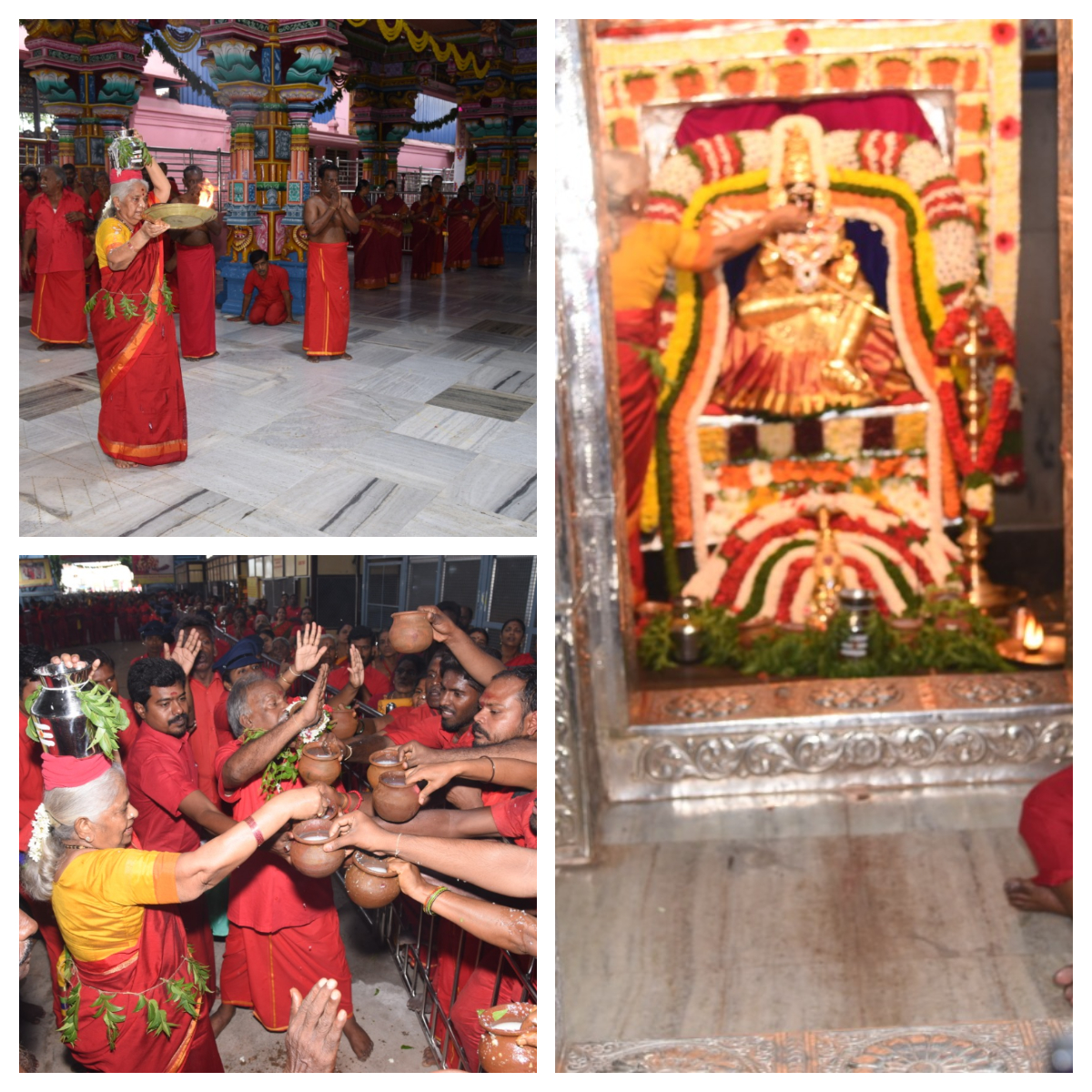 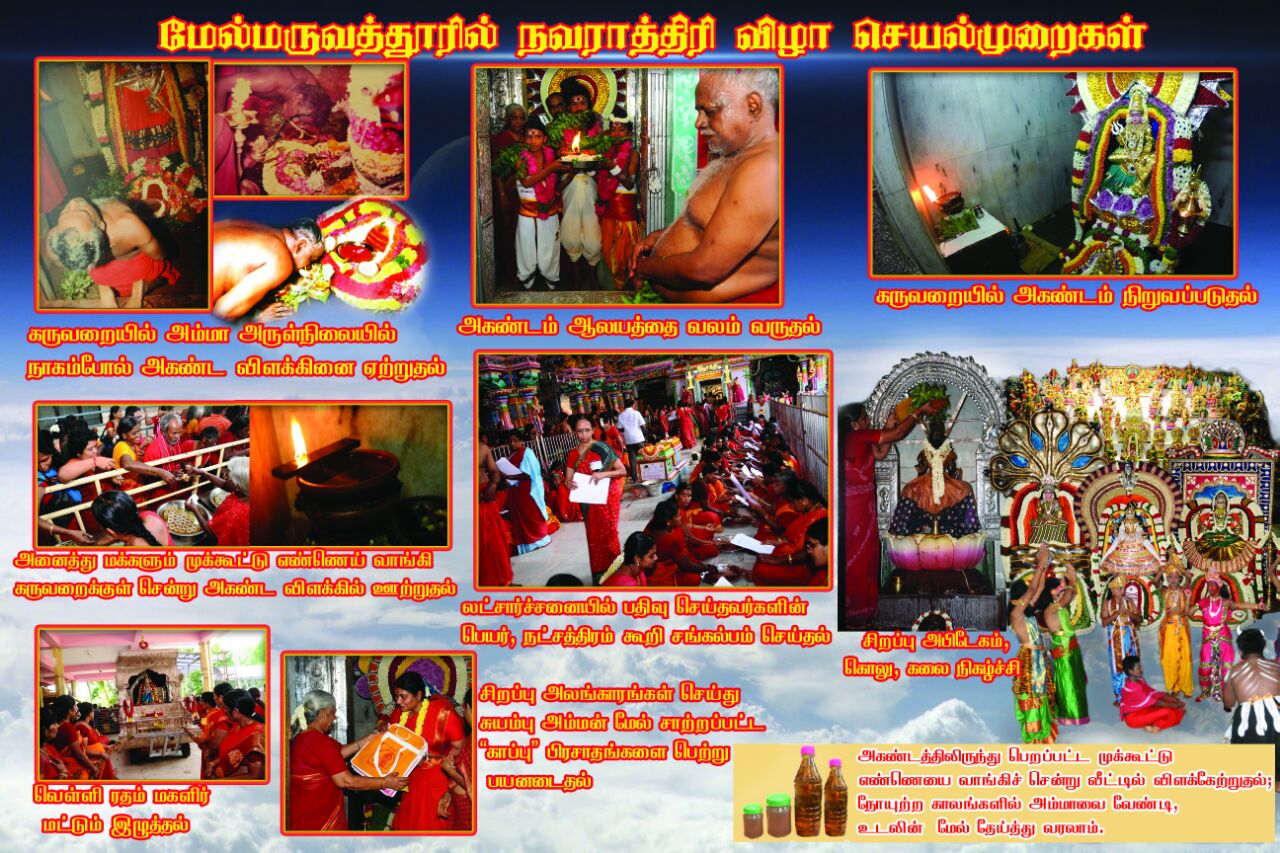 Navarathri is a key festival celebrated over nine days.  On the first day, Amma lights the lamp called Agandam filled with three oils -Neem, Coconut and Sesame. Prior to lighting the lamp, Amma goes around the Siddhar Peedam thrice, then enters PuttruMandapam to worship the Goddess, during which time Adhiparaksathi transcends into him.

In theDivine state, Amma then enters the Sanctum Sanctorum to perform rituals to the Swayambu, after which the wick of the Agandam is lit with Her mouth. At that point of time, Amma’s face and body almost resembles a dancing cobra. The Agandam burns for nine days continuously, while devotees pour the three-oil mixture into the lamp, worship the light emanating from the flame and breathe the Holy Smoke.

Amma, in Her Oracle has declared thus:“Agandam has the power to help man out of his crisis, which is the outcome of his fate and destiny.”